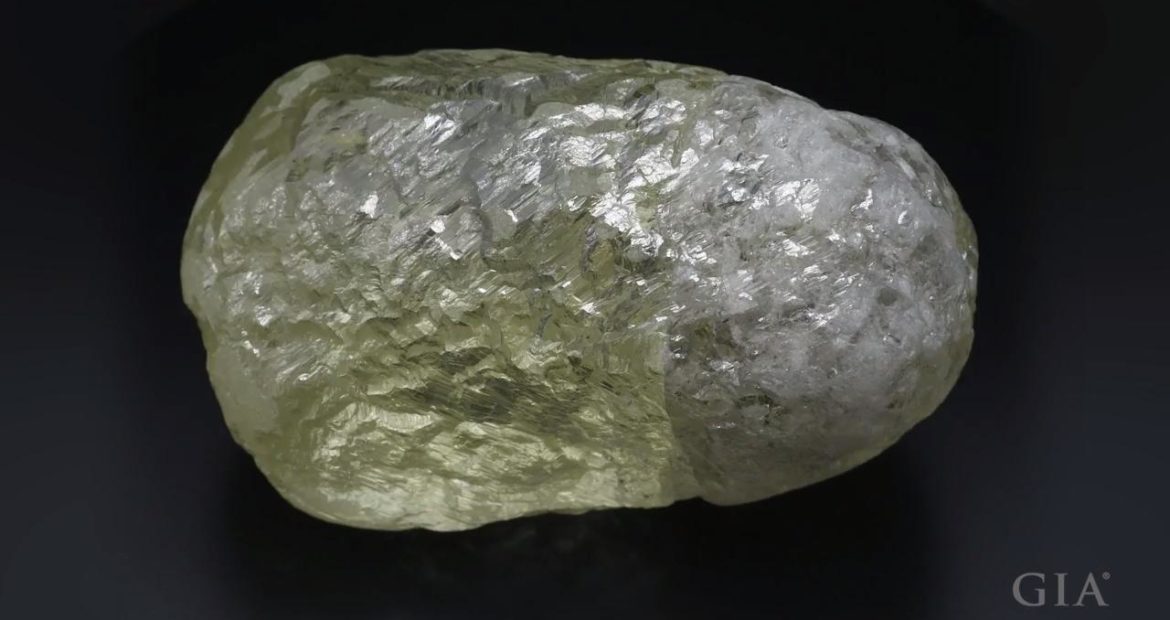 The Largest Diamond Ever Discovered in North America

In October 2018, a diamond weighing a remarkable 552.7 ct was recovered from the Diavik mine in Canada. This is by far the largest known gem diamond found to date in North America. It is nearly three times larger than the 187.63 ct Diavik Foxfire which was unearthed from the same mine in August 2015, and about twice the size of a 271 ct white diamond mined from the Victor mine in Canada. GIA’s New York laboratory had the opportunity to examine this notable diamond in late January 2019, before it went on public display at the Phillips Auctions in New York.

This large diamond (54.5 × 34.9 × 31.8 mm) has a striking yellow bodycolor and a rounded irregular ovoid shape (figure 1). The markedly rounded overall shape is due to strong resorption of the crystal surface, leaving a coarse surface texture of complex terraces and hillocks. Negative trigons were sparsely distributed. A fracture oriented perpendicular to the length divides a portion of the diamond, about a quarter of the way in from the smaller end (the left side in figure 1). In and around the fracture there are a few small black inclusions, possibly graphitic or sulfide. At high magnification, a portion of the fracture is slightly resorbed, suggesting that at least part of the fracture developed during ascent in the kimberlite. Patches of surface abrasion up to 7 mm across, but limited to a very shallow depth, are spread widely over the surface. According to a statement by Dominion, these markings are thought to be the result of abrasion during the recovery process, and the fact that the diamond remains unbroken is remarkable.

Infrared absorption spectroscopy reveals that the diamond is type Ia, with a very high concentration of aggregated nitrogen. A very weak absorption at 3107 cm–1 from the N3VH lattice defect was also recorded. UV-visible absorption spectroscopy reveals strong absorption from N3 (415 nm) and N2 (478 nm), a typical feature of “cape” diamonds. No other absorption features were detected in the UV-Vis spectrum, consistent with the pure yellow bodycolor visible to the eye. Under long-wave UV radiation, this diamond has strong blue fluorescence and weak but long-lasting yellow phosphorescence. Moderate whitish blue fluorescence and very weak orange phosphorescence were observed under short-wave UV radiation. All these gemological and spectroscopic features are very similar to those observed in the Diavik Foxfire. Photoluminescence analysis at liquid nitrogen temperature with varying laser excitations from the UV to the infrared region revealed additional features of a typical “cape” diamond. Main emission peaks included very strong N3 at 415 nm and weak H3 at 503 nm. In addition, weak emissions at 489, 535, 604, 612, 640, 700, 741, 787, and 910 nm were recorded. No emission from H4 (496 nm) or H2 (986 nm) was observed.

This diamond has a combination of size, color, and top gem quality that is extremely rare. It will be exciting to see this special diamond crafted into polished form. The Diavik mine is jointly owned by mining companies Rio Tinto and Dominion Diamond Mines.